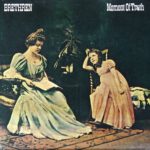 Moment Of Truth is the second album by the band Brethren, released in 1971.

Brethren features Rick Marotta who spent several years in the early 1970s as the drummer for his own group, the short-lived Brethren. Tom Cosgrove sang and played lead, Stu Woods played bass (he would later appear on Todd Rundgren’s Something/Anything? album), and Mike Garson played keyboards. They released two albums; the first was the eponymous Brethren, which was mildly successful. The second, released as the band was crumbling, is almost impossible to find. The band had a unique sound, a mixture of rock and country, with traces of jazz and influences from Dr. John (Mac Rebennack), who wrote the album notes and the song “Loop Garoo” for them.