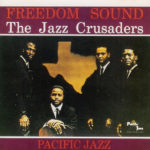 Freedom Sound is the debut album by The Jazz Crusaders recorded in 1961 and released on the Pacific Jazz label.

In 1960, following the demise of a few short-lived Houston-based groups called The Swingsters and the Nite Hawks, Joe Sample (piano), Stix Hooper (drums), Wilton Felder (saxophone), and Wayne Henderson (trombone), relocated to Los Angeles. After changing their name to “The Jazz Crusaders,” the group signed with Pacific Jazz Records, where they would remain throughout the 1960s. Employing a two-manned front-line horn section (trombone and tenor saxophone), the group’s sound was rooted in hard bop, with an emphasis on R&B and soul.