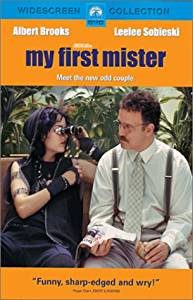 My First Mister is a 2001 film written by Jill Franklyn and directed by Christine Lahti. The film is the story of an alienated teen (Leelee Sobieski) who forms an unlikely friendship with a lonely clothing store manager (Albert Brooks). The film co-stars Carol Kane, Michael McKean, John Goodman, and Desmond Harrington.

The soundtrack was composed by Steve Porcaro. There is no official release of the soundtrack.