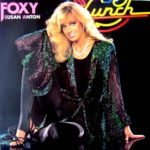 Foxy is an album by Susan Anton, released in 1981.

Susan Ellen Anton (born October 12, 1950) is an American actress and singer. She  starred in her own variety show, Presenting Susan Anton, Stop Susan Williams (one of three serials in the Cliffhangers series), and in the films Goldengirl, Spring Fever, and Cannonball Run II. She also recorded music, her biggest hit being “Killin’ Time” in 1980, a duet with country singer Fred Knoblock. The record made Top 10 on the country charts and hit #28 on Billboard’s Hot 100. In 1990, Anton appeared on the TV comedy series Night Court in an episode called “The Talk Show” where she played talk show producer Margo Hunter.