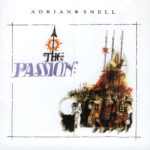 The Passion is the fifth album by Adrian Snell, released in 1980.

Adrian Snell (born 1954 in Northwood, Middlesex, England) is an English pianist, keyboard player, singer and composer. Classically trained at the Leeds College of Music and with a music diploma to his name (LGSM), Adrian’s musical career spans nearly four decades. During this time he has produced twenty-three original albums: seventeen solo albums and six major concept works. His major commissions include: ‘The Virgin’ from the BBC, ‘The Passion’, recorded with the Royal Philharmonic Orchestra and premièred on BBC Radio One