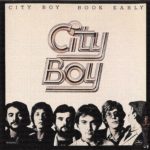 Book Early is the fourth album by City Boy, released in 1978