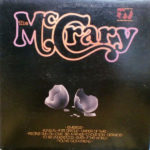 Emerge is the second album by The McCrarys, released in 1973.

The McCrarys are an American family Gospel and R&B group best known for the songs “You” (featuring Stevie Wonder on harmonica), “Lost in Loving You,” “Love on a Summer Night” and “Any Ol’ Sunday” (later covered by Chaka Khan). In 2014, they founded The McCrary Foundation, a nonprofit to help those in need through the healing powers of music.