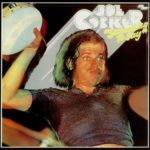 Joe Cocker is the third studio album by Joe Cocker, released in 1972 in Europe as Something to Say on Cube Records, and in the USA as Joe Cocker on A&M Records. It contains the hit single “High Time We Went”, that was released in the summer of 1971. Joe Cocker signalled Cocker’s change of direction into a more jazzy, blues style. The album reached no. 30 in the US album charts. However, although it received a positive response from the press, it made no impression on the British and European charts.

It is an unusual LP among Joe Cocker albums, in that he wrote the lyrics to six songs. All of them were co-written with Chris Stainton between 1969 and 1972. Only five were written with Stainton, as “Something To Say” was written with Nichols. However, the album’s main claim to fame might be that one of its tracks, “Woman to Woman”, was the basis for Tupac Shakur’s successful hit single “California Love”.

The album, re-titled as Something to Say, was originally released on CD in 1990 by Castle Communications and in 1998 a remastered edition of the album was released worldwide on A&M Records. Alan White, soon to be Yes’ drummer, played on this album alongside Jim Keltner, after he was featured on George Harrison’s All Things Must Pass and John Lennon’s Live Peace in Toronto, Imagine and Sometime in New-York City albums. Conrad Isidore played with Steve Stills and Hummingbird, among others. Percussionist Rebop Kwaku Baah was known for his work with Traffic and the German band Can.