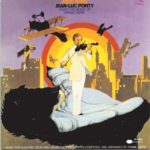 King Kong: Jean-Luc Ponty Plays the Music of Frank Zappa (or simply King Kong) is an album by French jazz fusion artist Jean-Luc Ponty first released in 1970 on Liberty Records’ World Pacific Records subsidiary label and later released on Blue Note. The album contains numerous selections Zappa had previously recorded either with the Mothers of Invention or under his own name, including:

“King Kong”, originally included on the Mothers’ 1969 album Uncle Meat
“Idiot Bastard Son”, from the Mothers’ 1968 album We’re Only in It for the Money
“Twenty Small Cigars”, from Zappa’s 1970 album Chunga’s Revenge
“America Drinks and Goes Home”, from the Mothers’ 1967 album Absolutely Free
In addition, the track “Music for Electric Violin and Low Budget Orchestra” includes the themes from “Duke of Prunes”, from Absolutely Free, and “Pound for a Brown”, from Uncle Meat. Zappa excised those themes, and everything that followed them, when he later recorded the piece himself under the title “Revised Music for Guitar and Low-Budget Orchestra”, which was first released on his 1978 album Studio Tan.