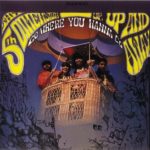 Up, Up and Away is the debut album by American pop group The 5th Dimension, released in 1967. The title track was released as a single and became a major pop hit.

The group’s first single release on Soul City Records, “Train Keep On Moving/I’ll Be Loving You Forever” was not a success, and is not included in the album. Both songs appear as bonus tracks on a later CD reissue of the album.

The first single released from this album, “Go Where You Wanna Go”, was initially recorded by The Mamas & the Papas and appears on their first album. The 5th Dimension’s version became a Top 20 hit in the US, reaching the #16 position. The group’s second release, “Another Day, Another Heartache”, also charted, peaking at #45.

The group appeared on many television shows of the day, including The Hollywood Palace, Shebang, and particularly The Ed Sullivan Show, where they became a favourite of the host. Performances exist of several of the album’s songs from these myriad shows, including “Go Where You Wanna Go”, “Another Day, Another Heartache”, “Pattern People”, “California My Way”, and the title track of the album.

2 Another Day, Another Heartache