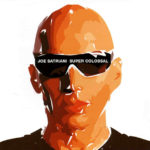 Super Colossal is the eleventh studio album by guitarist Joe Satriani, released on March 14, 2006 through Epic Records. The album reached No. 86 on the U.S. Billboard 200 and remained on that chart for two weeks, as well as reaching the top 100 in three other countries. Super Colossal was nominated for Best Rock Instrumental Performance at the 2007 Grammy Awards; this being Satriani’s thirteenth such nomination.

8 The Meaning of Love

10 Theme for a Strange World