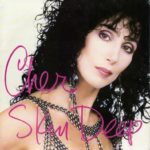 “Skin Deep” is a rock song performed by American singer-actress Cher from her eighteenth studio album, Cher. It was written by Mark Goldenberg and Jon Lind, and produced by Lind. It was released as the album’s third single in mid-1988.

Cher is the 18th studio album by American singer-actress Cher, released on November 10, 1987 by Geffen Records Five years after the release of Cher’s last album I Paralyze and her decision to focus on a film career, Cher signed with Geffen Records (which would later absorb one of her former labels, MCA Records) and […]