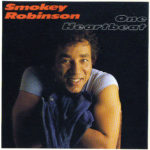 “One Heartbeat” is the second single released by Smokey Robinson from his 1987 album One Heartbeat. The song reached No. 10 on the Billboard Hot 100, No. 3 on the R&B singles chart, and No. 2 on the Adult Contemporary chart.

It was accompanied by a music video filmed in Southern California. The song was written by musician Brian Ray along with one-time Tommy Tutone keyboardist Steve LeGassick. The B-side, “Love Will Set You Free”, is from the 1986 film Solarbabies.