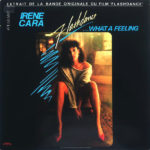 “Flashdance… What a Feeling” is a song from the 1983 film Flashdance, written by Italian composer Giorgio Moroder (music), Keith Forsey and Irene Cara (lyrics), and performed by Cara.

In the United Kingdom, the song spent one week at #2 on the UK Singles Chart for the week ending date July 9, 1983, behind “Baby Jane” by Rod Stewart.