1981 Smokey Robinson – Being With You 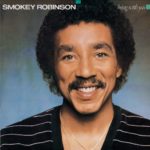 Being with You is a 1981 album by American singer Smokey Robinson. It is one of the few Smokey Robinson solo albums that have been released in the CD format. It features the million-selling, Gold-certified single title track “Being with You”, which hit #1 on the Cash Box Top 100. It just missed the #1 Pop position in Billboard, peaking at #2, making it Robinson’s highest-charting solo hit after leaving The Miracles. It was also #1 for five consecutive weeks on the R&B Chart and for two weeks on the UK Singles Chart.

Smokey’s first wife, fellow Miracles member Claudette Robinson, contributed background vocals to this album. This album has been Certified Gold by the RIAA. It eventually sold over 900,000 copies in the United States.