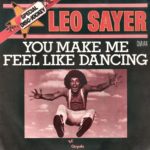 “You Make Me Feel Like Dancing” is a song by the British singer Leo Sayer, taken from his 1976 album Endless Flight. The song reached number one on the U.S. Billboard Hot 100 chart, making it his first number-one single in the United States, and reached number 2 on the UK Singles Chart. Billboard ranked it as the No. 13 song of 1977. Songwriters Sayer and Vini Poncia won a Grammy Award for the song in 1978 in the category Best R&B Song.