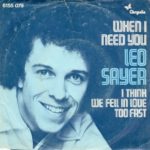 “When I Need You” is a popular song written by Albert Hammond and Carole Bayer Sager. Its first appearance was as the title track of Hammond’s 1976 album When I Need You. Leo Sayer’s version, produced by Richard Perry, was a massive hit worldwide, reaching number 1 on the UK Singles Chart for three weeks in February 1977 after three of his earlier singles had stalled at number 2. It also reached number 1 on both the Billboard Hot 100 for a single week in May 1977; and the Hot Adult Contemporary Tracks. Billboard ranked it as the No. 24 song of 1977. Sayer performed it on the second show of the third season of The Muppet Show.