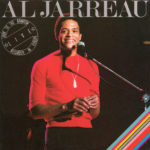 Look to the Rainbow is a live album by Al Jarreau, released on May 27, 1977 by Warner Bros. Records. It marked a breakthrough for his career in Europe and later also in the US. In 1978 it won the Grammy Award for Best Jazz Vocal Performance.

In 1976 Jarreau made his first live appearances in Europe, starting with concerts at the jazz festivals in Montreux and Berlin. The following year he began his first tour through 16 cities in Europe starting with a gig at Onkel Pö’s in Hamburg. Look to the Rainbow is a set of recordings from that tour.

The title song “Look to the Rainbow” is from the musical Finian’s Rainbow, a Broadway production from the late 1940s. The most recognized song on this album is Jarreau’s interpretation of Paul Desmond’s classic jazz number “Take Five”, which was also released as a single in an edited version in 1977.

Both tour and album brought him enthusiastic reviews in Germany, where he immediately became a darling of the public, while his recognition in the US remained low until he received his first Grammy in 1978.