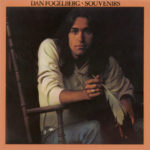 Souvenirs is the second studio solo album by the American rock singer-songwriter Dan Fogelberg. The album was released in late 1974, on the label Epic Records. The album reached #17 on the Billboard 200 in March 1975 and was certified double platinum by the RIAA. Joe Walsh produced the album and played on ten of the eleven tracks.

1 Part Of The Plan

7 As The Raven Flies

8 Song From Half Mountain

10 (Someone’s Been) Telling You Stories

11 There’s A Place In The World For A Gambler