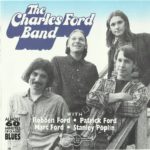 The Charles Ford Band selftitled album, was their first album and was released in 1972. They formed in 1971 and existed for about a year, till they got together in 1983 for a reunion. The band was named after Charles Ford, father of the brothers Robben, Patrick, and Mark.

3 My Time After Awhile