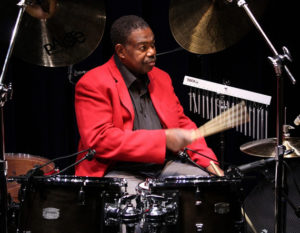 Leon “Ndugu” Chancler (July 1, 1952 – February 3, 2018) was a world renowned pop, funk and jazz drummer. He further developed his skills and shared his talent as a studio musician, composer, producer and university professor.

Chancler was born in Shreveport, Louisiana, and began playing drums when he was thirteen years old. He would publicly reminisce being asked to leave a classroom for continuously tapping on the desk, only to be later heard tapping on the poles in the hallway. While in high school, he played with Willie Bobo and the Harold Johnson Sextet. He graduated from California State University, Dominguez Hills with a degree in music education. By then he had already performed with the Gerald Wilson Big Band, Herbie Hancock, and recorded with Miles Davis, Freddie Hubbard, and Bobby Hutcherson.

In 2006, he became an Adjunct Assistant Professor of Jazz Studies at the University of Southern California and taught at the Stanford Jazz Workshop in California for three weeks every summer. He was a member of the Percussive Arts Society.