The song “Spice of Life”, from The Manhattan Transfer album Bodies and Souls, was a hit on both the R&B chart, reaching #32, and on the Pop chart, reaching #40. This song featured a distinctive harmonica solo by Stevie Wonder. The song has a similar structure to the album cut “Baby Be Mine” on Michael Jackson’s Thriller album. The song was written by Rod Temperton and Derek Bramble. 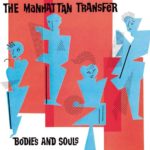