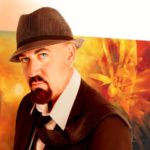 Michael Sembello was born and raised in Ardmore, Pennsylvania, a western suburb of Philadelphia. He studied with jazz great Pat Martino and began his career in music as a session musician, working increasingly with high-profile artists as a guitarist. By age 17 he was working professionally with Stevie Wonder on electric and acoustic guitar as a studio player on Wonder’s Fulfillingness’ First Finale. He continued the same year, chosen as one of the core artists who worked on Songs in the Key of Life, an ambitious concept album that took two years in the making. He was credited as lead and rhythm guitarist on most of the tracks, and shares songwriting credit with Wonder on the song “Saturn”. The list of pop music personalities he worked with, or wrote for, includes Wonder (from 1974 to 1979), The Temptations, Michael Jackson, Diana Ross, Chaka Khan, George Benson, Barbra Streisand, Stanley Clarke, David Sanborn, Donna Summer, Sérgio Mendes, Miguel Mateos and New Edition among many others.