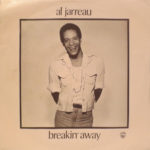 Breakin’ Away is a single from the same titled album by Al Jarreau.