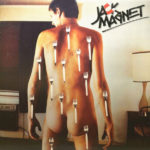 Jack Magnet is the fourth solo album by Jakob Magnusson. It was released in 1981.

Jakob Frímann Magnússon is an Icelandic composer, keyboard player, film director and producer. In Iceland he is best known as the keyboardist and one of the founders of the multiartistic band Stuðmenn, with which he has so far produced 15 albums as of 2014. He has also directed, produced and starred in several films, and released several solo albums with a number of famous jazz musicians from the United States. For a period of the 1990s he was the cultural attaché of the Icelandic embassy in London. Since 2002, aside from playing in Stuðmenn and recording new albums, Jakob Frímann is the co-owner and manager of the advertisement agency Bankastræti in Reykjavík.

Jakob studied music in California. During his time in the U.S. he started his own band with Carlos Rios (guitar), Steve Anderson (bass; www.stephenranderson.com) and David Logeman (drums) and released several albums with jazz-influenced music. On these albums he also involved many talented musicians such as Bill Champlin, Vinnie Colaiuta, Neil Stubenhaus, Abe Laboriel, Ernie Watts, Tom Scott, Peter Banks all of them big names in Jazz and Jazz Fusion. He has also been a studio musician for a number of American and Icelandic artists, and is known for his distinctive and tasteful keyboard solos and brilliant treatment of the Rhodes piano and various synthesizers.

1 Meet Me After Midnight

6 I Can’t Get Enough

7 I Can’t Live Without It