Fire Flower is the first album by Jimmy Stewart, released in 1977 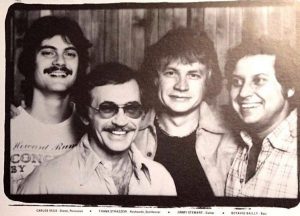 Jimmy Stewart (born September 8, 1937) is an American guitarist who has performed a wide variety of music since the late-1950s. He is best known for his association with jazz guitarist, Gábor Szabó, but has been extensively involved in many genres of music as an arranger, conductor, producer, orchestrator, musical director, and educator. Stewart has appeared on over 1,200 recordings.