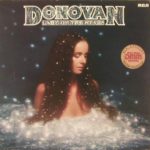 Lady of the Stars is the seventeenth studio album, and nineteenth album overall, by the British singer-songwriter Donovan. It was released in the UK (RCA PL 70060) and the US (Allegiance Records AV 437) in January 1984.
By 1983, Donovan’s albums were receiving little distribution in the UK and none in the US. His popularity had steadily decreased through the 1970s and early 1980s and mainstream record companies were not convinced that Donovan’s albums could generate enough record sales to warrant release. Donovan decided that to win over the record companies and reach his American and British fans, he would record new versions of both “Sunshine Superman” and “Season of the Witch” for inclusion on his next album. Both songs were released on the Sunshine Superman album in 1966 and Donovan’s Greatest Hits in 1969. The name recognition of these two songs would give the record companies marketing leverage and guarantee release.

1 Till I See You Again

2 I Love You Baby

5 Season Of The Witch

6 Lady Of The Stars

8 For Everybody There Is A Girl