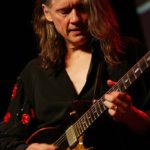 Robben Ford (born December 16, 1951) is an American blues, jazz and rock guitarist. He was a member of the L.A. Express and has collaborated with Miles Davis, Joni Mitchell, George Harrison, Larry Carlton and Kiss.

Robben Ford was born in Woodlake, California and raised in Ukiah, California. He began playing the saxophone at age 10 and the guitar at age 14. Robben and his brothers created the Charles Ford Blues Band in honor of their father.

At age 18, Ford’s band was hired to play with Charlie Musselwhite and recorded two albums The Charles Ford Band and Discovering the Blues. He recorded two albums with Jimmy Witherspoon called Live and Spoonful. In the 1970s, Ford joined the jazz fusion band, L.A. Express, led by saxophonist Tom Scott. In 1974 the band supported George Harrison on his American tour and played on the Joni Mitchell albums The Hissing of Summer Lawns and Miles of Aisles

1982 Michael McDonald – If That Is What It Takes

1986 Brandon Fields – The Other Side Of The Story

1987 Neil Larsen – Through Any Window

1988 Robben Ford – Talk to Your Daughter

1995 Various – In From The Storm The Music Of Jimi Hendrix

2004 Various – Spin the bottle, An Allstar Tribute To Kiss

2006 Various – A Tribute To The Genius Of Steely Dan