“If I Never Knew You“ is a song by American recording artists Jon Secada and Shanice, from Disney’s 1995 animated feature film, Pocahontas. The song was written by composer Alan Menken and lyricist Stephen Schwartz, and originally recorded by American singer Judy Kuhn in her film role as the singing voice of Pocahontas, and American actor Mel Gibson in his role as Captain John Smith. Shanice and Secada’s version is heard during film’s end credits, and was released on September 12, 1995 as the second single from the film’s soundtrack, after Vanessa Williams’ pop rendition of the Academy Award-winning “Colors of the Wind”.

The song was originally developed for the prison scene where Pocahontas visits Captain John Smith before he is to be put to death for the alleged murder of Kocoum, Chief Powhatan’s warrior whom Pocahontas was going to marry. The musical number, which was about 90% animated, was to be a duet performed by the pair as they acknowledge their love for each other. During test screenings with child audiences their attention “seemed to wander from the film.” Therefore, Alan Menken, the composer of the songs for Disney’s Pocahontas, suggested it be cut because he also felt that it slowed the pace of the movie. Additionally, another song, “Savages”, occurred not five minutes after. Though cut from the movie itself, If I Never Knew You was still performed by Jon Secada and Shanice at the end credits and released as a single. It had a few different lyrics than the film’s original lyrics.

In 2005, Disney released the tenth anniversary edition of Pocahontas, which had the song fully animated and integrated into the film, but was an optional feature that the viewer could choose or watch the original theatrical version instead, due to seamless branching. It was performed by Mel Gibson (Captain Smith) and Judy Kuhn (Pocahontas) within the film’s narrative. It was recorded for the original film in 1995. The audio version became available in 2015 for the Walt Disney Records: The Legacy Collection edition of the film’s soundtrack. 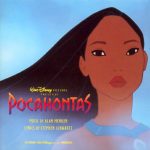