No One in the World“ is a song by American R&B singer Anita Baker. It was the fourth single from her “multi-platinum” album, Rapture. It had previously been released by Dionne Warwick on her 1985 album Finder of Lost Loves.

“No One in the World” peaked to number five on the Billboard Hot Black Singles chart, and #9 on the Billboard Adult Contemporary Singles. The single peaked at number #44, missing Billboard’s top 40 Hot 100 chart. 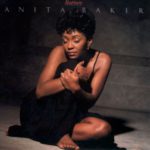