“Try Again” is a 1983 song by the American R&B band Champaign. Released in March of that year as the only single from their album Modern Heart, this ballad peaked at number 23 on the Hot 100 in June and became a hit on the R&B chart, just missing the #1 spot. 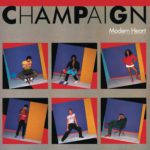