“Every Heartbeat” is a 1991 single by American Christian music singer Amy Grant. It was released as the third single from the Heart In Motion album, though it was the second from the album to be released to mainstream pop radio. After the unexpected major success of Grant’s previous single, “Baby Baby,” which topped both the United States’ Billboard Hot 100 and Adult Contemporary charts, there seemed the question on how to follow it up. The chosen single was “Every Heartbeat,” and although it did not hit number one, it still managed to make the #2 spot on the Hot 100 and the Adult Contemporary chart for one and six weeks respectively. In both cases Every Heartbeat was kept from the top spot by Bryan Adams’ song “(Everything I Do) I Do It for You”. Charlie Peacock wrote the song’s music and chorus lyrics, with Grant and Wayne Kirkpatrick composing the remaining lyrics. In 2004, Sixpence None The Richer covered “Every Heartbeat” on the album Full Circle: A Celebration of Songs and Friends, which commemorated Charlie Peacock’s 20-year anniversary as a solo recording artist. Mark Lowry parodied the song with the title “Every Teacher”. 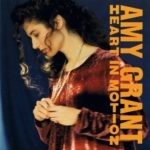