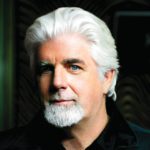 Michael McDonald (born February 12, 1952) is an American singer, songwriter, keyboard player, and record producer. He is known for his soulful baritone voice.

McDonald’s music career spans more than forty years. His early career included singing with Steely Dan. He joined The Doobie Brothers in 1976 and remained an integral member until 1982, after which he released the first of eight solo albums. During his career, he has collaborated with a number of other artists, including Van Halen, Patti LaBelle, Aretha Franklin and Toto. He has also recorded for television and film soundtracks. During his career, McDonald has won five Grammy Awards.