John Frederick Robinson (born December 29, 1954 in Creston, Iowa, also known as John “JR” Robinson or  JR Robinson) is an American drummer and session musician. He is most known for his work with Quincy Jones, including Michael Jackson’s multiplatinum Off the Wall album and the charity single “We Are the World”.

From Drummerworld: One of the most recorded drummers in history, John JR Robinson got his musical start in Creston, Iowa, where he was born in 1954. Both of JR’s parents wanted him to be involved in music, so at the age of 5 came the piano, drums at 8, and JR started his first band at the ripe old age of 10. JR credits his drumming chops to having great teachers early on. At 14 he began playing with the Iowa Big Band, that was located in SW Iowa near Creston. During his high school years he was both an athlete and a drummer – fortunately he picked the correct career choice. After graduation he emigrated to Boston and the Berklee School of Music, playing in both small groups and big bands.

In 1978, JR Robinson was hired for the drum chair in Rufus and moved to Los Angeles to finish the Rufus and Chaka Khan tour. In late 1978, JR was asked by Quincy Jones if he did any sessions outside Rufus. An immediate ‘yes’ found him in the studio recording “Off The Wall” for Michael Jackson. After that session, unlike many, JR created a career path. “I decided that I wouldn’t turn down any gig and set out a 15 year studio plan”, he recalls. “Now, I’m in my 23rd year in the studios and still going strong, although because I’m so busy I do have to turn down some offers. Over the years I’ve gotten the big calls and worked with really great artists”.

Some of the hits for him are: “We Are The World”, Lionel Richie’s “All Night Long”, The Pointer Sisters’ “I’m So Excited” and “Slow Hand” and David Lee Roth’s “I’m Just a Gigolo” and “California Girls”. Other artists that JR Robinson backed are Steve Winwood, Natalie Cole, and in 1983 he won a Grammy with Rufus and Chaka Khan for “Ain’t Nobody”.

Even with his very busy schedule, JR Robinson has found time to teach a course in “Studio Techniques” at the Los Angeles Music Academy every other semester. He is currently working on his solo CD and producing several projects, and will continue to add his magic on many hits to come with his recognized sound of great time and a great groove. John JR Robinson, an Iowa, who has made the big time and been the drummer for most of the top artists in the very competitive musical world of the Los Angeles studios. 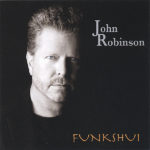