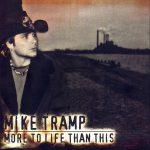 More to Life Than This is the third solo album by former White Lion and Freak of Nature lead singer, Mike Tramp, released on March 17, 2003.

The album was recorded in Copenhagen, Tramp once again produced the album himself but relied on producer/engineer Flemming Rasmussen (Metallica) to engineer and mix the sessions in his very own Sweet Silence Studios.

Following a guest appearance on Tramp’s last solo album Recovering the Wasted Years, Oliver Steffenson, a life long friend of Mike Tramp and who was involved with the very early stages of White Lion and also with Tramp formed Freak of Nature, joins Tramp’s solo band.

The album titled track “More to Life Than This” and “Don’t Want to Say Good Night” were both released as singles for the album. A music video made in Australia was released for the song “Lay Down My Life For You”.

10 The Good The Sad And The Ugly