“You Gotta Love Someone“ is a 1990 song by Elton John, written by Elton John along with Bernie Taupin and was released as a single from the Days of Thunder soundtrack; the single was also used to promote the Rocket Records 2-CD retrospective “The Very Best of Elton John,” issued largely in overseas markets excluding the U.S., where the more expansive box set “To Be Continued…” was issued. The single peaked at number forty-three on the Billboard Hot 100, but spent five weeks at number one on the Adult Contemporary chart, his tenth number one on the chart (which is found to be peculiar, as the single was not released in America.)

Produced by Don Was, “You Gotta Love Someone” and the three other tracks that close Disc 4 of “To Be Continued …” (along with “Made For Me,” “Easier To Walk Away” and “I Swear I Heard The Night Talking,” the latter of which was released first as a b-side of the single in France), were all recorded in one take each (minus overdubs). The tracks were also purported to be selections for a possible album project with Was that was later abandoned. 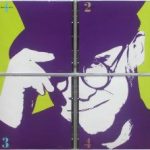