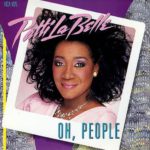 “Oh, People” is the second single from Winner in You, the eighth solo album of Patti LaBelle, released on June 30, 1986. The song is a socially conscious anthem with lyrics pleading to individuals to unite and “build the world we want together”. The single featured the non-album track “Love Attack” on the B-side.

Winner in You is the eighth studio album by American R&B singer Patti LaBelle, released April 28, 1986, on MCA Records. Recording sessions took place during 1985–1986. Production was handled by several record producers, including Burt Bacharach, Carole Bayer Sager, and Nickolas Ashford, among others. The album peaked at number one on the US Billboard […]