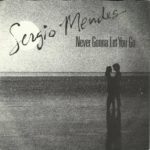 “Never Gonna Let You Go“ is a popular song from 1983 credited to Brazilian musician and bandleader Sérgio Mendes and sung by Joe Pizzulo and Leza Miller. Songwriters Cynthia Weil (lyrics) and Barry Mann (music) composed the song, which appears on Mendes’ 1983 self-titled album.

Weil and Mann originally submitted “Never Gonna Let You Go” to American funk band Earth, Wind & Fire, but they decided not to record the song. Dionne Warwick had previously recorded the song, which appears on her 1982 album Friends in Love. Stevie Woods had also recorded the song for his 1982 album The Woman in My Life.

Mendes, preparing for the release of his 1983 album, was quoted as saying, “All the other songs on the album were up and festive. I needed a ballad on the album, just to change the pace a bit.” Mendes’ version was a hit, matching the No. 4 peak of his previous best showing on the Billboard Hot 100 chart, “The Look of Love”, in 1968. It spent four weeks at No. 1 on the Billboard Adult Contemporary chart and peaked at No. 28 on the Billboard R&B chart.