1979 The Sutherland Brothers – When The Night Comes Down 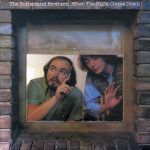 The Sutherland Brothers (Gavin and Iain Sutherland) originally performed as a folk and rock music duo in the British music scene in the early 1970s, and then from 1973 to 1978 joined with rock band Quiver to record and tour as Sutherland Brothers & Quiver. Under this combined moniker, the group recorded several albums and had a significant international hit single with the song “Arms of Mary” in 1976. In North America they are primarily known for their 1973 debut single “(I Don’t Want to Love You But) You Got Me Anyway”, which was not a hit in the UK.

The Sutherland Brothers parted company with Quiver (i.e., Wilson) by 1979, but continued to release material as the Sutherland Brothers for a time. In this period they achieved one further chart success with “Easy Come Easy Go”, in June 1979. However they disbanded late in 1979 after recording a final album When The Night Comes Down on CBS, with the final single being “First Love”/”Crazy Town”.