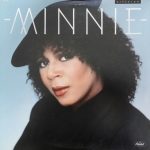 Minnie is the fifth album by Minnie Riperton, released in 1979.

Minnie Julia Riperton-Rudolph (November 8, 1947 – July 12, 1979), known professionally as Minnie Riperton, was an American singer-songwriter best known for her 1975 single “Lovin’ You”. She was married to songwriter and music producer Richard Rudolph from 1972 until her death in 1979. They had two children: music engineer Marc Rudolph and actress/comedian Maya Rudolph.

Minnie Riperton grew up on Chicago’s South Side. As a child, she studied music, drama, and dance at Chicago’s Lincoln Center. In her teen years, she sang lead vocals for the Chicago-based girl group, The Gems. Her early affiliation with the legendary Chicago-based Chess Records afforded her the opportunity to sing backup for various established artists such as Etta James, Fontella Bass, Ramsey Lewis, Bo Diddley, Chuck Berry, and Muddy Waters. While at Chess, Minnie Riperton also sang lead for the experimental rock/soul group Rotary Connection, from 1967 to 1971. On April 5, 1975, Minnie Riperton reached the apex of her career with her #1 single, “Lovin’ You”. The single was the last release from her 1974 gold album entitled Perfect Angel.

In April 1979, Minnie Riperton released her fifth and final album, Minnie. “Memory Lane” was a hit from the album, and was arguably Riperton’s greatest work. Riperton incorporated the sadness of the ending of a relationship while suddenly shifting to cries of “I don’t want to go,” “save me,” “now I’m slippin’ fast,” “thought it was over; here I go again,” and “travelin’ down, faster than the speed of sound.