2002 Todd Rundgren – With A Little Help From My Friends 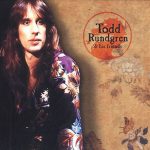 With A Little Help From My Friends is an album by Todd Rundgren, released in 2002.

Todd Harry Rundgren (born June 22, 1948) is an American multi-instrumentalist, songwriter, and record producer. Hailed in the early stages of his career for both his own material and for his production of other artists, supported by the certified gold solo double LP Something/Anything? in 1972, his career has produced a diverse and eclectic range of recordings often both as a solo artist and as a member of the band Utopia. Todd Rundgren has often been at the forefront as a promoter of cutting edge recording technologies.

4 Something To Fall Back On

5 Bang On The Drum All Day

6 Love Is The Answer

8 Emperor Of The Highway