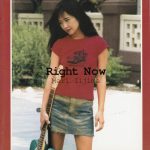 Right Now is an album by Mari Iijima, self released in 2001

Mari Iijima (born May 18, 1963 in Tsuchiura, Ibaraki, Japan) is a Japanese singer-songwriter. She writes and produces most of her own music, is a multi-instrumentalist, including playing the piano. After being signed to JVC Victor in 1982, Mari Iijima first became known for her voice-acting role as Lynn Minmay in the anime Macross. Her debut original album, Rosé, was released in 1983, which was produced by composer Ryuichi Sakamoto. She also later collaborated with other world-renowned musicians, such as Van Dyke Parks. She lives in Los Angeles, California, United States.

5 Give It One More Chance

6 If You Really Want to Know