“Underground“ is a song from the soundtrack of the film Labyrinth, performed by David Bowie.

The track was something of an experiment for Bowie, dabbling in gospel music to a small extent, helped by a large chorus of backing vocalists and blues guitarist Albert Collins, but retaining use of synthesizers.

The single reached No. 21 in the UK Singles Chart.

Labyrinth is a soundtrack album by David Bowie and Trevor Jones, released on cassette and vinyl in 1986 for the film Labyrinth. The first audio CD release was in 1989. It was the second of three soundtrack releases in which Bowie had a major role, following Christiane F. and preceding The Buddha of Suburbia. The soundtrack album features Trevor Jones’ score, which is split into six tracks for the soundtrack: “Into the Labyrinth”, “Sarah”, “Hallucination”, “The Goblin Battle”, “Thirteen O’Clock”, and “Home at Last”. 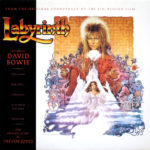