“In Your Eyes“ is a single by American R&B singer George Benson, which entered the UK Singles Chart on 24 September 1983. It reached a peak position of number 7, and remained in the chart for 10 weeks. It was written by Michael Masser (music) and Dan Hill (lyrics). It was also covered by Jeffrey Osborne in 1986.

In 1984, Regine Velasquez (formerly known as Chona Velasquez) sang the song as her winning piece in Ang Bagong Kampeon. Fifteen years later, she recorded the song for her covers album R2K. 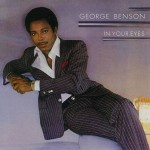