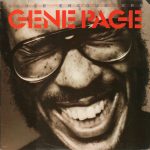 Close Encounters is the fourth album by Gene Page, released 1978.

In addition, he released 4 solo albums and scored various motion picture soundtracks that include Brewster McCloud and Fun with Dick and Jane. In 1972, Gene Page was hired to score the Blaxplotation film Blacula. The soundtrack to the film is now considered a cult classic and collector’s item to record enthusiasts.

Gene Page was one of the most prolific arrangers/conductors of popular music during his time and worked on more than 200 gold and platinum records.

1 Close Encounters Of The Third Kind

4 Dancin’ In The Sky

6 Beyond The Hole In Space