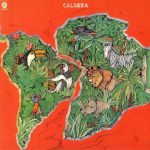 Caldera is the 1976 debut album of Jazz fusion band Caldera.

Caldera was an American band, that combined jazz, funk and rock with a wide variety of Latin music. 1970s fusion explorers like Return to Forever and Weather Report influenced Caldera, but its members were also influenced by everything from Earth, Wind & Fire’s soul/funk to Afro-Cuban salsa, Brazilian samba and Andean/Peruvian music.

Members of Caldera, which was led by keyboardist Eduardo del Barrio and guitarist Jorge Strunz (Strunz & Farah), came from all over Latin America as well as parts of the United States. While bass player Dean Cortez and saxophonist Steve Tavaglione were US born, other members were born in Costa Rica (Strunz), Argentina (del Barrio), Cuba (drummer Carlos Vega) and Brazil (percussionist Mike “Baiano” Azevedo). In 1976, Caldera signed with Capitol and recorded its self-titled debut album, which was followed by Sky Islands in 1977, Time and Chance in 1978, and Dreamer in 1979. The four albums (only the first of which have been reissued on CD) did not sell, and the band called it quits in 1979.

However, most of Caldera’s members kept busy long after its breakup. Strunz went on to form the guitar duo Strunz & Farah with Iranian/Persian guitarist Ardeshir Farah, while del Barrio worked with artists such as Earth, Wind & Fire, Stan Getz and Dianne Reeves throughout the 1980s and 1990s. Percussionist Alex Acuña has become one of the most sought-after percussionists in jazz.