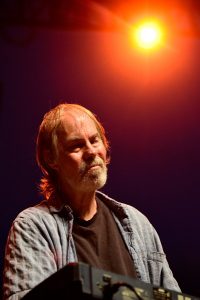 William “Bill” Payne (born March 12, 1949 in Waco, Texas, USA) co-founded, with Lowell George, the American rock band Little Feat. He is considered by many other rock pianists, including Elton John, to be one of the finest American piano rock and blues music artists. In addition to his trademark barrelhouse blues piano, he is noted for his work on other keyboard instruments, particularly the Hammond B3 organ. Payne is also an accomplished songwriter whose credits include co-writing, with Lowell George, the Little Feat classic, “Oh, Atlanta.” Payne is currently a member of Boulder band Leftover Salmon.

Following the death of Little Feat drummer Richie Hayward on August 12, 2010, Payne is the only member of the group from the original four-piece line-up currently playing in the band.

In August 2015, Payne was selected to play keyboards for The Doobie Brothers after their keyboardist Guy Allison was called to work on an album project in Japan. In the few weeks of touring with the Doobies, he was featured with the band and Michael McDonald on The Tonight Show Starring Jimmy Fallon. Payne’s temporary term ended in early September after the Doobies’ concert at the BB&T Pavilion in Camden, New Jersey.

Payne rejoined the Doobies as a touring member in December 2015, officially taking the position previously held by Allison.