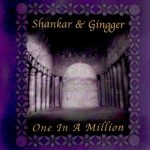 Gingger Shankar is an Indian American singer, composer and multi-instrumentalist. She has scored several award-winning films, including Passion of the Christ and Circumstance.

1 One In A Million

8 We Are Meant To Be

9 Look Into My Eyes