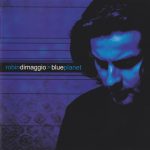 Robin DiMaggio (born 1971) is a drummer and classical/world percussionist based out of Los Angeles. He has performed/recorded with artists as diverse as Steve Vai, Paul Simon, Diana Ross, and Dr. Dre. He has also worked as a producer/songwriter and a composer/arranger, and produced the albums Road to Forever (2012) by Don Felder of The Eagles and Be Here Then (2014) by Stephen Bishop.

On September 9, 2013, DiMagio took the role of Musical Director and drummer for the late night TV show the Arsenio Hall Show on CBS  He has since performed with Nelly, Flo Rida, R. Kelly, Billy Ray Cyrus, Gladys Knight, and Earth Wind and Fire, among others. Prior to Arsenio, he was the house band drummer on the CW’s hit game show Oh Sit and TBS’ Lopez Tonight, hosted by George Lopez. In the latter he played with guests such as Slash, Carlos Santana, Jamie Foxx, Puff Daddy, Emilio Estefan, Hector Elizondo, Andrew Dice Clay, Andy Garcia, Lucrecia, Rodrigo y Gabriela, Steel Magnolias, David Guetta, Charlie Wilson, Beth Hart, Los Lobos, George Clinton and Justin Bieber, John Legend, Sergio Mendez, 50 Cent, P. Diddy, and Snoop Dogg. Robin is currently serving as Musical Director to the PGA Gala 67th 68th 69th session at the General Assembly and also serving as Musical Director for the South South Awards year during the General Assembly in Sept at the Majestic Waldorf Astoria N.Y. He has received his re occurring title as musical Director to the United Nations in 2015. Robin also collaborated with legendary Joe Satriani as co Writer and Producer to the new earthsong, Music without Words due out in September 2015.