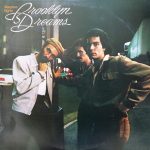 Sleepless Nights is the second album by Brooklyn Dreams, released in 1979.

Their sophomore effort Sleepless Nights (1979) was a greater commercial success for the group as it featured their musical collaboration with their label mate Summer. The group toured as opening act for Summer and found itself hosting The Midnight Special and performing on the popular talk shows The Mike Douglas Show and The Merv Griffin Show, as well as Dick Clark’s American Bandstand, Solid Gold and “Don Kirshner’s Rock Concert”. That year, the band co-wrote “Bad Girls” with Summer, and the single topped the Billboard Hot 100, Hot Black Singles and Hot Disco charts. Their own “Make It Last”, however, did not improve on earlier chartings.

3 Sleepless Night / Send Me A Dream

9 Coming Up The Hard Way